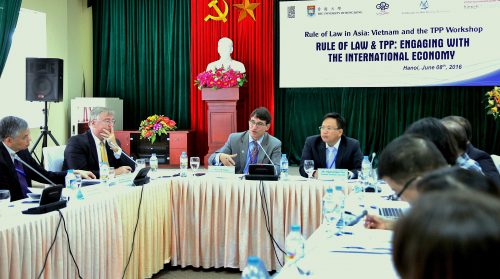 The Rule of Law in Asia program has the following objectives: 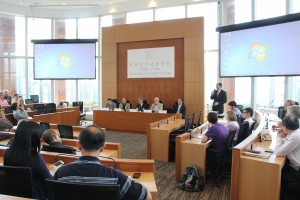 On June 8th and 9th, 2016, the Mansfield Foundation convened the Rule of Law: Vietnam and the TPP workshop in partnership with the University of Economics and Business-Vietnam National University and Hong Kong University (HKU).

Based at the University of Economics and Business (UEB), part of Vietnam National University in Hanoi, the program comprised two days of private, interactive workshop sessions addressing legal reform in Vietnam in the context of the Trans-Pacific Partnership (TPP) and Vietnam’s expanding foreign trade.

The Foundation convened the program in response to the significance of Vietnam’s entrance into the TPP and the sweeping reforms that will need to accompany Vietnam’s accession to TPP in order to achieve successful implementation.  The program also reflected the outsized importance to the U.S. Congress of Vietnam’s accession to TPP, and therefore the role that Vietnam may play in Congress’s ultimate decision to proceed with or to obstruct TPP.

In light of these factors, the broad aim of the program was to facilitate communication and effective working relationships in the context of TPP implementation.  The program focused on relationships between members of Vietnam’s trade and legal policy community and expert voices from Washington, D.C., from both outside and within the U.S. government.  The program also brought in scholars and practitioners from the Hong Kong and Japanese trade communities in order to provide third party perspectives on Vietnam and the TPP.

The program, which was hosted by UEB Rector Nguyen Hong Son, and chaired by Mansfield Foundation President and CEO Frank Jannuzi, brought fifteen senior foreign policy and trade experts from the U.S. and Hong Kong together with twenty-five Vietnamese lawyers and representatives from four ministries and the National Assembly.  Workshop sessions addressed trade politics, interpretation of international law, domestic reform and institutional capacity building, labor obligations, and the role of the international community in facilitating Vietnam’s successful implementation of its TPP obligations.

Barry Hager (President, Hager Associates) and Justice Anselmo Trinidad Reyes (Professor of Legal Practice, HKU) served as senior advisors to the program.  Participants were also joined by the U.S. Embassy’s Deputy Chief of Mission Susan Sutton, Cu Chi Loi (Vietnam Academy of Social Sciences), and Vo Tri Thanh (Central Institute for Economic Management), each of whom presented remarks during public seminar sessions. The program was made possible through the generosity of the Hinrich Foundation, the Henry Luce Foundation, and the VF Corporation.

In 2013 and 2014, the Foundation hosted a pair of Rule of Law meetings in Hong Kong. The 2013 meeting, Legal Institutions, Trade, and Investment in China, brought together legal scholars and practitioners from China, Hong Kong, Taiwan, and the U.S. to reassess the progress and developments in the rule of law in their respective nations and regions during the past decade. The conference was the result of collaboration between the Mansfield Foundation, New York University’s U.S.-Asia Law Institute, the University of Hong Kong, and Sun Yat-sen University. It benefitted from the generous support of the Hinrich Foundation, the Lingnan Foundation, the Better Hong Kong Foundation and the Taiwan Foundation for Democracy.

Legal Institutions, Trade, and Investment in China focused specifically on rule of law and the reliability of legal institutions in China as they pertain to international trade and related economic matters such as land use. A central objective of the program was to provide leading legal scholars, policymakers and practitioners with an opportunity to interact with their international counterparts and representatives of the international trade and broader business communities to better understand international best practices pertaining to rule of law and economic and trade concerns. An equally important objective was for those scholars participating in the program to reach out to broader publics in their home countries, highlighting for them the necessity of strong rule of law for sustained international trade and investment, robust economic development and sustained improvement of living standards.

The program, though based in Hong Kong, included a workshop in the dynamic international trade and export-focused region of neighboring Guangzhou. The Guangzhou workshop afforded an opportunity for participants to engage with business, academic, and government communities on the relevance and importance of strong rule of law – with particular emphasis on land use and land rights – for robust economic development.

The experiences of the Guangzhou case study inspired a partnership between the Mansfield Foundation and Hong Kong University on a December 2014 Rule of Law Myanmar Workshop. The workshop, based at Hong Kong University’s Centre for Comparative and Public Law (CCPL), selected ten legal practitioners from Myanmar for a weeklong training seminar focusing on rule of law capacity building in fast-changing Myanmar. Like the previous Hong Kong meeting, the Hong Kong-Myanmar program emphasized equipping participants with the knowledge and tools to become positive agents of rule of law development in their home country. Participants in the workshop comprised young professionals from a variety of small and large businesses and non-governmental institutions, working on rebuilding the rule of law in Myanmar. The five-day intensive workshop consisted of seminars and lectures by legal academics, lawyers, and judges, together with site visits to prominent Hong Kong rule of law institutions, including the offices of the Independent Commission Against Corruption and the Equal Opportunities Commission. The 2014 workshop was made possible by the generous support of the Hinrich Foundation and Hong Kong University, with support from Chevron and Freeport MacMoRan. 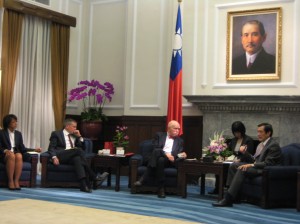 In May 2002, the Foundation organized a retreat, the first of three in Taipei, on the rule of law, during which a small group of legal scholars and practitioners from Asia and the United States continued to explore advancements in the rule of law in Asia. In 2009 the Mansfield Foundation organized the second Taipei meeting in collaboration with National Taiwan University, Benchmarking the Ten-Year Development of the Rule of Law in Asia from 1999-2009, including a two-day roundtable dialogue and public conference. The third Tapei Rule of Law conference in 2012, organized by the Foundation, in cooperation with National Taiwan University College of Law, comprised a three-day, closed-door work session where a select group of scholars and legal practitioners privately shared experiences and debated on areas such as rule of law concepts and policies, as well as proposals for future advances. The private session was followed by a half-day public conference where the results and recommendations from the three days of working sessions were discussed in the context of contemporary Asian rule of law issues. Participants in all three of the Taipei meetings were honored to have private discussions with President Ma Ying-jeou.

Inaugural Tokyo Meeting, Asia Dialogues, 1999-2000
The program began in 1999 with a Mansfield Foundation–Global Forum of Japan co-sponsored workshop on “The Rule of Law and Its Acceptance in Asia” in Tokyo. Funded by the Japan-U.S. Friendship Commission and the Foundation, this workshop provided an open forum for scholars, legal practitioners and policy makers to examine the core components of the rule of law and the economic and political implications of the rule of law for nations in Asia. In preparation for the workshop, with funding support from The Luce Foundation, the Foundation commissioned Barry Hager, an attorney and specialist in international finance, trade and administrative law, to write The Rule of Law: A Lexicon for Policy Makers, a publication that served as the basis of discussion at the Tokyo workshop and has been a resource throughout the project.

The candid and spirited exchanges at the Tokyo workshop suggested a continuing need to examine and parse the rule of law and its core components, particularly as they apply to economic and political life in Asia. As a result, the Mansfield Foundation co-sponsored a series of Mansfield Dialogues for scholars, practitioners and policy makers in Beijing, Shanghai and Hong Kong in December 1999, with Beijing University School of Law, Fudan University School of Law and City University of Hong Kong School of Law. With a grant from The Starr Foundation, the Mansfield Foundation organized additional dialogues in September 2000 in Hanoi, Ho Chi Minh City, Taipei, and Seoul. These dialogues were co-sponsored with the Institute of State and Law in Vietnam, National Taiwan University, and Kyungnam University in Korea. The dialogues were followed by a retreat and conference in Missoula, Montana, and a daylong conference in Washington.

Building on the successful model of the 2014 Hong Kong-Myanmar workshop, the Foundation will hold a similar workshop in 2015/2016 focusing on rule of law in Vietnam. The program, which will be held in Hanoi, will facilitate rule of law capacity-building in the face of that country’s: rapid economic development and influx of foreign investment; strengthening integration with the global economy and partners such as the United States; and Japan; and status as an original signer of the Trans-Pacific Partnership.

Among the previous participants with whom the Foundation has worked on this program are: Tsung-Fu Chen of National Taiwan University’s Department of Law, Albert H.Y. Chen and Simon Young of the University of Hong Kong, Hualing Fu of the University of Hong Kong, Eun Young Park of Kim and Chang, Daniel Fung of Des Voeux Chambers and Wejen Chang of the Academia Sinica. In future years the Foundation intends to continue to reach out to new participants from other countries in order to broaden the program’s geographic reach and to expose a greater number of legal professionals to the ongoing discussion.

The Mansfield Foundation notes the generous contributions of New York University School of Law Professors Jerome Cohen and Frank Upham in developing and sustaining the Rule of Law in Asia program.