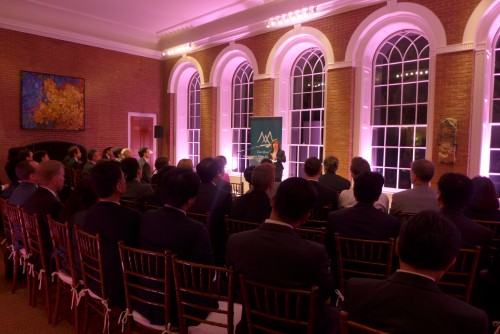 On November 17, 2015 Wendy Cutler (Vice President and Managing Director, Washington Office, Asia Society Policy Institute) delivered remarks about the Trans-Pacific Partnership (TPP) at an  event co-hosted by the Mansfield Foundation and S&R Foundation and Dr. Sachiko Kuno and Dr. Ryuji Ueno.  The event was held in cooperation with the Embassy of Japan.  Ms. Cutler was responsible for the TPP negotiations from the U.S. side, including the bilateral negotiations with Japan, in her previous role as Acting Deputy U.S. Trade Representative. At the November event she reflected on different stages of the negotiations before commenting on the importance of TPP, the challenges of concluding the agreement, and Japan’s participation in the negotiations.

Ms. Cutler asserted that TPP is the most important trade agreement since the Uruguay Round of multilateral trade negotiations.  She described it as a comprehensive, high standard agreement that embraces values held by the United States, Japan, and other countries and that will serve as a template for future agreements.  Moreover, she said that TPP provides strategic benefits and underscores the U.S. commitment to the Asia-Pacific region.

Ms. Cutler said that challenges during the TPP negotiating process included not only the sheer number of issues, but the number of countries participating in the negotiations and their differing priorities, sensitivities, and levels of development.  Ms. Cutler emphasized that the resulting agreement was a carefully balanced outcome with no room for renegotiating without tipping this balance and unraveling the agreement.

Ms. Cutler called Japan an “incredible” partner in the TPP negotiations, especially on rules issues like intellectual property rights.  Even on tough issues such as autos and agriculture, she said her Japanese counterparts were committed to finding a mutually acceptable deal.  She noted a marked difference in the U.S.-Japan relationship between the TPP negotiations and previous trade negotiations, and said Japan’s decision to change its negotiating structure was instrumental to Japan’s ability to achieve results in the TPP.

The event was moderated by Mireya Solis (Senior Fellow, Center for East Asia Policy Studies, Brookings Institution).  Dr. Solis is a Cohort I scholar in the U.S.-Japan Network for the Future program. She commented on the implications of TPP success as well as the tasks facing TPP partners, which include ratification, domestic reforms, and building bridges to other countries to enlarge the agreement.