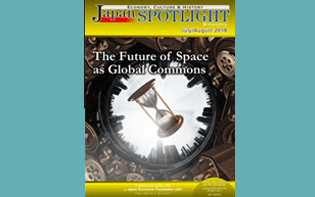 In January 2018, the Maureen and Mike Mansfield Foundation convened the sixth meeting of the U.S.-Japan Space Forum in Washington, D.C. The group of American and Japanese experts from the private sector, academia, and government has met regularly since 2014 to address areas of critical concern for the space community. Participants from the 2018 forum, including Foundation Director of Programs and Development Ryan Shaffer, were featured in the July/August issue of Japan Spotlight. The issue explores “The Future of Space as Global Commons,” and Mr. Shaffer’s article focuses on “Space in the U.S.-Japan Bilateral Relationship & the Recommendations of the U.S.-Japan Space Forum.”

Other featured participants includes interviews with Saadia Pekkanen, Professor at the Henry M. Jackson School of International Studies and Adjunct Professor at the School of Law, University of Washington and Shoichiro Asada, Executive Director of Japan Space Forum Space as a New Business Frontier. Setsuko Aoki, Professor of Law at Keio University Law School, also contributed an article titled, “The Future of Space as Global Commons from the Perspective of International Law.”