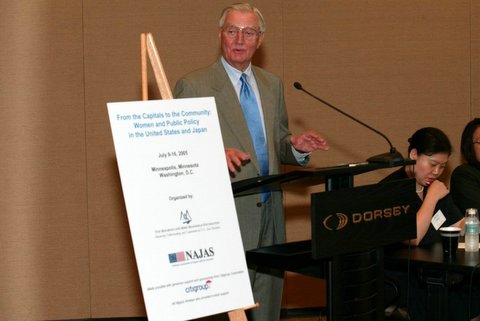 The Maureen and Mike Mansfield Foundation mourns the loss of Vice President Walter Mondale, who passed away yesterday at the age of 93.

A revered public servant who held the offices of Senator, Vice President, and U.S. Ambassador to Japan, Mondale was also a strong supporter of the Mansfield Foundation. He served on the Mansfield Foundation Board of Directors from 2004-2014, including as chairman of the board from 2008-2014. He joined the Foundation’s new International Advisory Board in 2014, where he held the position of chair for the remainder of his life.

Vice President Mondale was a Senate colleague of Mike Mansfield, and his role on the Mansfield Foundation Board led the organization through key moments, including the Foundation’s 25th and 30th anniversary celebrations. He led two board delegations on trips to Tokyo, meeting with Prime Ministers Yasuo Fukuda and Taro Aso, as well as participating in Mansfield Foundation activities in Washington, DC and his native Minnesota. In recent years, he remained a firm supporter of the organization’s mission, and an advocate for the Mansfield Fellowship Program.

A native of Minnesota, Walter Mondale served as Minnesota state attorney general from 1960-1964, and represented Minnesota in the United States Senate from 1964-1976. In 1976, as Jimmy Carter’s running mate, Mr. Mondale was elected vice president of the United States. Mr. Mondale was the Democratic nominee for President in 1984. He also served as chairman of the National Democratic Institute for International Affairs, an organization that conducts international programs to maintain and strengthen democratic institutions. From 1993-1996, Mr. Mondale served as United States ambassador to Japan in the Clinton Administration. In addition to service on the board of the Mansfield Foundation, he served on the boards of the Guthrie Theatre Foundation, Mayo Foundation and University of Minnesota Foundation, as well as several corporate boards of directors.