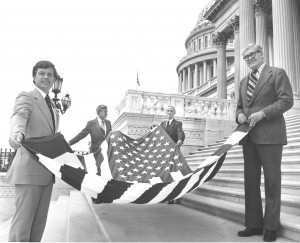 Throughout his career, Mansfield remained loyal to his constituents and the state of Montana. During his campaign in 1944, Mansfield declined to take a partisan stand on divisive issues, and would only state, “I pledge my best for the welfare of Montana and the Nation.” (Don Oberdorfer, Senator Mansfield (Washington: Smithsonian, 2003)).

Despite his travels abroad and work in Washington, Mansfield frequently returned home to Montana to visit with constituents. Mansfield estimated that over 4,500 Montanans visited him in Washington during his time in Congress, and he personally read and signed all letters to his Montana constituents.