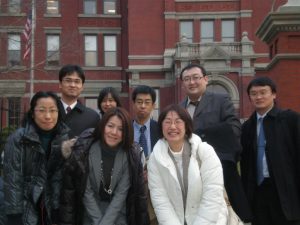 The U.S.-Japan Healthcare and Medical Device Exchange brought eight civil servants from Japan’s Ministry of Health, Labour and Welfare (MHLW) and Pharmaceutical and Medical Devices Agency (PMDA) to the United States January 24-30, 2009 to learn about U.S. healthcare policy and regulatory practices. The Japanese participants met with their counterparts in the U.S. government, congressional staff, and U.S. healthcare professionals and engaged in information exchanges intended to contribute to the implementation of regulatory and health policies that promote innovation and favorable health outcomes.

The program began with a site visit to the Johns Hopkins University Medical Center and the Johns Hopkins Bayview Medical Center, a state-of-the art medical facility in Baltimore. The delegation then participated in two days of briefings and dialogues at the U.S. Food and Drug Administration (FDA). There they learned about the FDA’s regulation of human tissue, cellular therapy, and combined products, and participated in roundtable discussions with alumni Mansfield Fellows Sema Hashemi (Mansfield Fellow 2006-2008) and Carole Carey (Mansfield Fellow 2003-2005) and with the Director of the Office of Combination Products and other FDA officials. They later received an extensive tour of the FDA’s White Oak laboratory. The delegation also had the opportunity to meet with officials from the International Trade Administration at the Department of Commerce, industry policy experts, and staff in the office of Rep. Vic Snyder (D-Arkansas), who serves on several health-related caucuses.