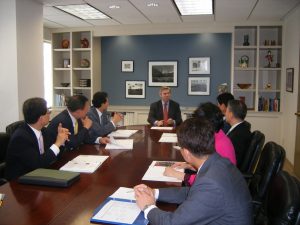 During five days of meetings, the Korean lawmakers met with U.S. government officials and Asia experts to discuss issues including: U.S. policy and perspectives on North Korea; U.S. relations with China and other Asian nations; the presidential candidates’ views on Asia; and the process and politics involved in U.S. ratification of the Korea-U.S. Free Trade Agreement.