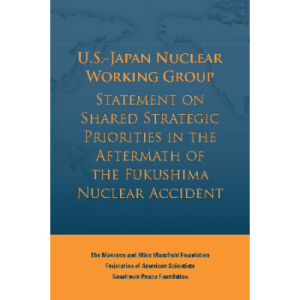 The U.S.-Japan Nuclear Working Group, an independent bi-national group of experts tasked with examining the broader strategic implications of the March 2011 Fukushima Daiichi Nuclear Power Plant accident, has released a statement summarizing its findings and recommendations.  The report, “Statement on Shared Strategic Priorities in the Aftermath of the Fukushima Nuclear Accident,” reflects the group’s consensus after twelve months of discussions with opinion leaders in Japan, the United States, and the global nuclear government community in Vienna, Austria.

Over the course of these discussions, members of the U.S.-Japan Nuclear Working Group (listed below) sought to develop a fuller understanding of the circumstances and implications of Japan’s quickly evolving energy policy situation.  Their shared concerns about the strategic interests impacted by changes to Japan’s energy paradigm led them to articulate: issues that must be addressed irrespective of Japan’s energy policy decisions; broader strategic concerns within Japan’s energy policy debate; and strategic recommendations for the industries and governments of Japan and the United States.  These outcomes are outlined in the report

“Japan clearly faces critical decisions about the future path of its energy policy, decisions that will impact our shared strategic interests,” said Gordon Flake, executive director of the Maureen and Mike Mansfield Foundation.  “It is our hope that the concerns and priorities outlined by the U.S.-Japan Nuclear Working Group will be factored into Japan’s nuclear energy policy debate and into the considerations of the Japanese and American energy and foreign policy communities.  We look forward to discussing the group’s findings with the Washington and Tokyo policy communities and with the Japanese public in the months ahead.”  Details about public seminars to be held in Tokyo, Osaka, and Hiroshima this fall will be made available on the Foundation’s website in the preceding weeks.

The activities of the U.S.-Japan Nuclear Working Group have been made possible primarily through the support of the Sasakawa Peace Foundation, the Federation of American Scientists, the Smith Richardson Foundation, and the Carnegie Corporation.  Generous in-kind support was provided by All Nippon Airways, with supplementary, unrestricted grants received from Hitachi, Toshiba, Mitsubishi and the Chubu Electric Power Company.

Group members include the following individuals:

* currently a training officer at the International Atomic Energy Agency
** in participating in U.S.-Japan Nuclear Working Group activities, did not receive resources or support from any organization other than the participant’s home institution

For the .pdf of this news release, please click here.