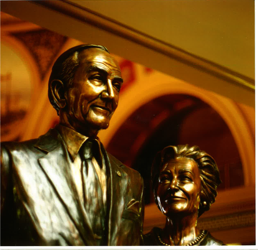 This statue of Maureen and Mike Mansfield, sculpted by Gareth Curtiss and unveiled November 26, 2001, stands in the State Capitol in Mike Mansfield’s home state of Montana. The plaque on the statue reads, “Together they did their best for Montana, the nation and the world.”  When initially approached about the sculpting of the statue, Mike Mansfield refused, and only relented on the condition that the statue feature his wife Maureen alongside him, as she was throughout his career and life. Mike Mansfield called Maureen the greatest influence of his life. It was Maureen who convinced him to leave the copper mines and continue his education and Maureen who encouraged him to enter politics.
When Congress recognized Mike Mansfield by establishing the Foundation in his honor, he recognized Maureen’s role in his life and career, insisting that it be named the Maureen and Mike Mansfield Foundation.

At the unveiling ceremony for the statue depicted here, former U.S. Representative Pat Williams reiterated Mike Mansfield’s often repeated sentiments, “We Montanans, we Americans, we citizens of the world owe Maureen Mansfield more than we can ever know or ever repay.” (Charles Johnson, “Mansfield statue unveiled in Capitol,” Helenair (November 26, 2001).