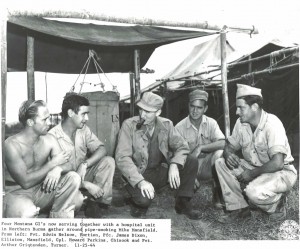 Mike Mansfield’s service as a Marine sent him to the Philippines, China, and Japan.  His brief visits to Tientsin and Shanghai as a Marine sparked an interest in China that grew during his years at Montana State University (now The University of Montana) and in the House of Representatives, where he served on the House Foreign Affairs Committee.

In 1944, very early in his House career, Mansfield persuaded President Roosevelt to send him to China on a fact-finding mission to observe the war in Asia.  His biographer, Don Oberdorfer, attributes Mansfield’s motivation for seeking the trip to his fascination with “…China and the war in Asia, which he regarded as more vital to the United States than the European battles that had greater priority and greater attention.”  (Don Oberdorfer, Senator Mansfield (Washington: Smithsonian, 2003)).

Throughout Mansfield’s mission to China, he frequently sought out soldiers from his home state, delivering messages from family members, and always undertaking the cause of a fellow soldier from Montana.  The photo above shows Mike Mansfield with Montana troops serving with a hospital unit in northern Burma.  During his 1944 trip, Mansfield visited eight U.S. military hospitals along the Ledo Road and had two conferences with Nationalist Chinese leader Chiang Kai-shek.

Although Mike Mansfield’s 1944 trip to China was just the first of his many missions abroad, Don Oberdorfer notes that it was the “single most important event of Mike Mansfield’s career in the House, elevating him from obscurity to national prominence.”