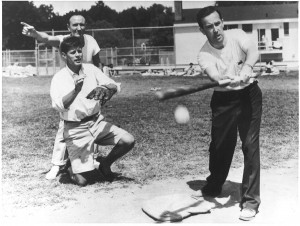 Mike Mansfield and John F. Kennedy entered the Senate together as freshman senators in 1953 and maintained a close friendship and working relationship throughout their careers. Just two years into their Senate careers, Mansfield remarked to a reporter that “Kennedy was a charmed person and would be president someday.” (Don Oberdorfer, Senator Mansfield (Washington: Smithsonian, 2003)).

Mike Mansfield also served as a trusted advisor to the president during the Kennedy administration. He privately counseled President Kennedy on a number of issues spanning domestic and international politics. President Kennedy relied heavily on him as an expert on Asian affairs, and sent Senator Mansfield on a number of foreign policy assignments abroad, including a mission to Vietnam. Mike Mansfield’s expertise on East Asia helped shape U.S. foreign policy during this period, and helped President Kennedy pursue a policy of negotiation, not conflict, in Laos.