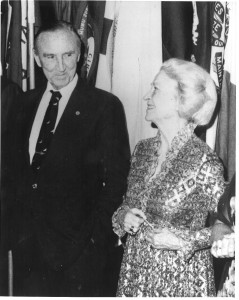 Mike Mansfield met Maureen, a college-educated schoolteacher, in the late 1920s, a meeting his biographer, Don Oberdorfer, says he often described as the most important event of his life. It was at Maureen’s urging that Mike left the copper mines and returned to school, receiving first his high school equivalency and Bachelor’s degree, and later his Master’s degree, at Montana State University (now the University of Montana). He then went on to teach Latin American and East Asian history at the university.

Moreover, it was with Maureen’s encouragement and support that Mike later left teaching to pursue a career in politics. Mike Mansfield often cited Maureen as the unsung hero who was responsible for his achievements. At the eulogy he delivered after her death in September 2000, Mansfield said, “…She literally made me in her mold, her own outlook, her own honest beliefs…without her – I would have been little or nothing.” Throughout their sixty-eight years of marriage, Maureen and Mike were inseparable. She was “his most important counselor” as well as one of three “great loves” of his life, along with Montana and the U.S. Senate. (Don Oberdorfer, Senator Mansfield (Washington: Smithsonian, 2003)).

At Mike’s insistence, the honors he received always noted her contributions as well. The Maureen and Mike Mansfield Center, Foundation and Library, in addition to a statue of the two displayed in the Montana State Capitol building, all recognize Maureen’s important place in Mike’s life and in history.