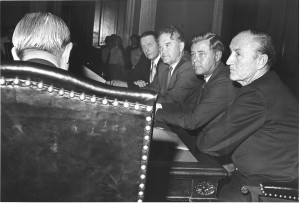 Although most noted for his role in foreign policy, particularly with regard to Asia, and his time spent as ambassador to Japan, Mike Mansfield’s many political accomplishments cover domestic issues as well. From the time of his election to the House of Representatives in 1942 to his retirement from the Senate in 1977, Mansfield played an integral, if often unheralded, role in U.S. domestic policymaking.

As his friend and former Senate counsel Charles Ferris remarked in his eulogy, “He was at the helm of the Senate at the height of fundamental achievement — the Nuclear Test Ban Treaty, Civil Rights Act of 1964, the Voting Rights Act of 1965, the passage of Medicare, federal aid to education, the 18-year old vote — all deeply controversial… each time Mike Mansfield’s leadership was the hinge of history. He was the man without whom the achievements might well have been different.”

Mike Mansfield also is said to have shaped the character of the modern Senate more than any other leader in its history by allowing the emergence of a Senate of equals and giving a voice and role to younger senators.