Mike Mansfield Photo of the Week May 2 – May 8 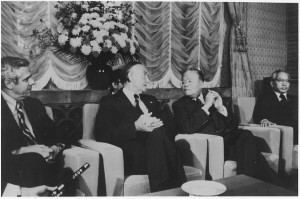 Months before he was appointed U.S. ambassador to Japan by President Jimmy Carter, Mike Mansfield reported to the Senate Foreign Relations Committee that “U.S.-Japan relations are good but they could be better…A new relationship on the basis of equality and mutuality of interests has begun.” (Don Oberdorfer, Senator Mansfield (Washington: Smithsonian, 2003))  Mike Mansfield arrived in Tokyo at a time of reflection on the future direction of the bilateral relationship and with instructions for dealing with several difficult trade and security issues.

Masayoshi Ohira, who served as Japan’s prime minister from 1978 to 1980, was the second of five prime ministers Mike Mansfield dealt with during more than eleven years as U.S. ambassador to Japan.  Despite growing opposition from those who supported measures that would gradually distance Tokyo from Washington’s dominance, Ohira had continued his predecessor Takeo Fukuda’s efforts to further positive cooperation with the U.S. in the security area. Ohira was well known for his negotiating abilities; as Prime Minister Ikeda Hayato’s chief cabinet secretary, he helped stabilize the country after the anti-American sentiment of the late 1950s. During Ohira’s time in the office, Japan boycotted the Olympics game in Moscow to protest Soviet action in Afghanistan and to show Japan’s solidarity with the West.

Following Ohira’s death in office in 1980, Mike Mansfield worked with three other Japanese prime ministers. According to Mansfield’s biographer Don Oberdorfer, President Carter described Mansfield’s service in Japan during this challenging period as “both constructive and stabilizing.” The President commended Mike Mansfield for having “…helped avoid economic disturbances.  Knowing that you are in Tokyo and having the benefit of your sound observations and candid comments has helped our relationship.” (Don Oberdorfer, Senator Mansfield (Washington: Smithsonian, 2003))