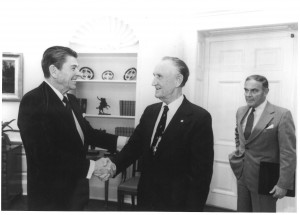 Earlier in his career, Mike Mansfield’s skill at avoiding divisive partisan issues allowed him to maintain strong bipartisan relations in Congress, enabling him to lead the Senate in passing laws that would shape the future of our country.  Internationally, Mansfield was held in high esteem throughout Asia during his congressional career and his tenure as the longest-serving U.S. ambassador to Japan.