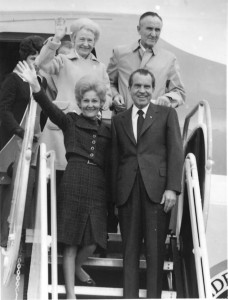 Their working relationship would continue throughout the years.  Mike Mansfield served as Senate Majority Leader in the Nixon administration, and met regularly with President Nixon for private discussions at the White House.  Although their politics and personalities were very different, President Nixon shared Mike Mansfield’s interest in Asia, and sent Senator Mansfield on fact-finding missions to Asia to observe nations in the midst of conflict.  As Mansfield biographer Don Oberdorfer notes, “One subject on which Nixon and Mansfield agreed unconditionally was the importance of establishing relations between the United States and China.” (Don Oberdorfer, Senator Mansfield (Washington: Smithsonian, 2003)).  It was with Mike Mansfield’s assistance that the U.S. was able to re-start talks with China by laying the groundwork for President Nixon’s visit to China in 1972.