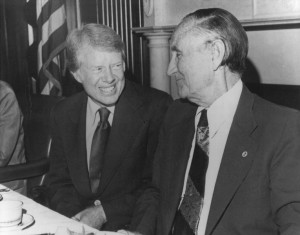 After retiring from the Senate, Mike Mansfield planned to spend his days relaxing and reading with Maureen, but his political prowess and abundant knowledge remained in high demand. Mansfield’s biographer Don Oberdorfer writes, “Carter did not know Mansfield well but was aware of the nearly universal admiration in which he was held and of his extensive experience in Asia.” (Senator Mansfield (Washington: Smithsonian, 2003)).

In early 1977, the newly-elected President Carter requested that Mansfield join a delegation to Hanoi slated to discuss U.S.-Vietnam relations. That same year, President Carter appointed Mansfield as the new ambassador to Japan, and Mansfield graciously accepted his new post. He had taken six trips to Japan while serving in the Senate. Upon returning from his final trip as a member of Congress in 1976, Mansfield submitted a report to the Senate Foreign Relations Committee stating, “U.S.-Japan relations are good but they could be better. The era of patron-client is over. A new relationship on the basis of equality and mutuality of interests has begun.” (Don Oberdorfer, Senator Mansfield (Washington: Smithsonian, 2003)).

However, Carter knew that Mansfield’s knowledge of Asia extended well beyond the Japanese borders and often consulted him on issues pertaining to the area as a whole. According to Oberdorfer, President Carter instructed other U.S.ambassadors to Asia to regard Mansfield as a senior counselor for the entire region.