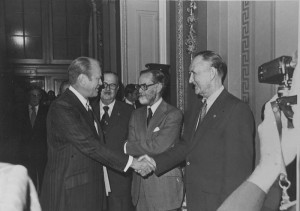 Mike Mansfield and Gerald Ford first met when they served together in the House of Representatives beginning in 1949. Professional interactions increased between the two men in the 1960s with Mansfield becoming the leader of the Senate Democrats in 1961 and Ford taking over the post of leader of the House Republicans in 1965. Despite their party differences, Mansfield and Ford cultivated a long-standing friendship. Ford stated that Mansfield was, “a loyal democrat, but he was also fair and broad-minded in his relationship with Republicans.” (Don Oberdorfer, Senator Mansfield (Washington: Smithsonian, 2003)).

Ford began his presidency in 1974, as Mansfield was serving his thirteenth year as Senate Majority Leader. His biographer Don Oberdorfer claims, “Mansfield felt more comfortable personally with Gerald Ford than any other president of his time in Congress, except for his great friend John F. Kennedy.” (Senator Mansfield (Washington: Smithsonian, 2003)). Mansfield and Ford did not see eye to eye on every issue and were most divided on the strategy of action following the withdrawal of American troops in Vietnam, with President Ford seeking additional funding while Mansfield deeply opposed any increase in U.S. involvement.

Despite these differences in opinion, Mansfield and Ford maintained a friendly and cooperative working relationship throughout Ford’s presidency. The two men also developed a personal connection that extended beyond the political scene, and Maureen Mansfield had a close friendship with President Ford’s wife.