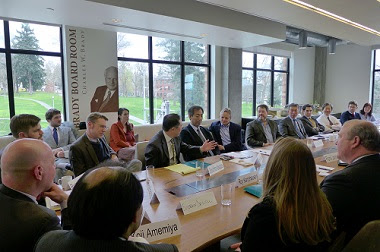 In March 2016, the Forum met for a fourth meeting in Seattle Washington, which has emerged as one of the hotspots for American space innovation and new industry activity. The meeting provided opportunities to discuss the forum’s concerns with some of the organizations at the forefront of American space innovation, including Seattle-area firms Aerojet Rocketdyne, Tethers Unlimited, Planetary Resources, Vulcan Aerospace, Blacksky, and Space Angels Network.  The group also heard U.S. military perspectives on the revised Guidelines for U.S.-Japan Defense Cooperation and bilateral space collaboration from representatives of the U.S. Army and U.S. Air Force. The meeting provided a view of American space activities from “outside of the bubble” of Washington, D.C., that emphasized some of the implications for space practitioners of evolving American space policies and regulations.

During the Seattle meeting, the Forum partnered with the Museum of Flight, the Japan-U.S. Friendship Commission, the National Bureau of Asian Research (NBR), and the International Policy Institute at the University of Washington Jackson School to host “The U.S.-Japan Space Forum: Space in the U.S.-Japan Alliance.” The event, which featured a panel discussion on “Space in the U.S.-Japan Alliance:  Threats and Opportunities,” afforded the group an opportunity to share findings with a public audience.