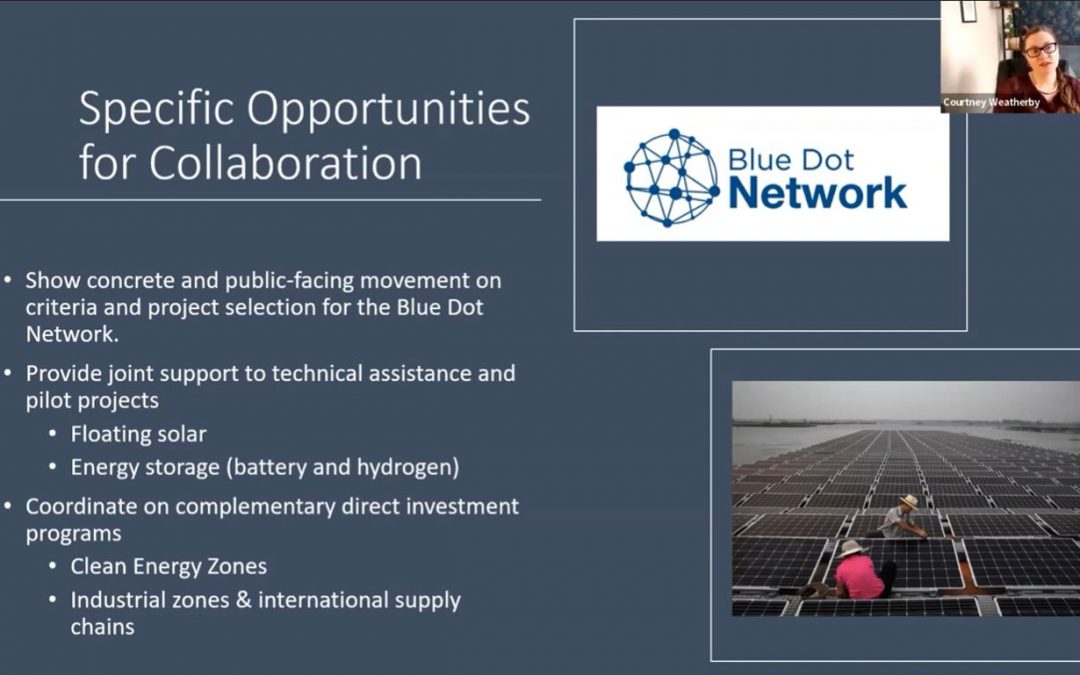 Earlier this year, the Mansfield Foundation hosted two roundtables in an ongoing series looking at U.S.-Japan Cooperation in the world, with sessions focused on Maritime Security and Free and Open Infrastructure Investment. Recordings of these sessions are now available online.

View the roundtable on the Foundation’s YouTube page here.

Dr. Hatakeyama began the session by outlining the challenges and opportunities for Japan in terms of maritime security, turning to her recommendations for U.S.-Japan cooperation in the maritime sphere based off of those challenges and opportunities. Her key point was that military presence, plus a soft approach when it comes to working towards cooperation, will lead to common understanding.

CDR Bradford followed her presentation by detailing the myriad roles the U.S.-Japan alliance plays in maritime security. He discussed the importance of basing, combined operations, networking partnerships and facilitating maritime access, coordinating with extra-regional partners, and cooperative capacity building when it comes to U.S.-Japan cooperation in the maritime sphere. Alliance revisions in these areas have made the alliance an increasingly powerful force multiplier supporting both nations and has facilitated an increase of capability in military force.

Dr. Hornung, the final speaker, wrapped up the presentation portion by summarizing and adding to the points that Dr. Hatakeyama and CDR Bradford discussed previously, mainly focusing on the key lines of efforts that the United States and Japan can focus on when it comes to a united front for maritime security. He summarized these into four categories that particularly emphasize Japan’s supportive efforts now that Japan is becoming more active in the maritime domain; FONOPs and transit operations, legal and diplomatic efforts, joint exercises and training, and security operations.

During the Q&A portion, CDR Bradford emphasized that the United States and Japan are moving in the right direction when it comes to avoiding a potential Taiwan Strait conflict, but there needs to be a more coherent effort overall, particularly when it comes to capacity building cooperation. Dr. Hornung added that we must challenge China’s claims and take China to task for not abiding to international rules and laws. Additionally, Dr. Hatakeyama asserted that no one wants to confront China at this time because of economic opportunities. Still, we must send them the signal that we are ready to do so when the time comes. The session concluded with additional questions focused on China, and how the United States and Japan should respond to Russia in light of their respective positions towards China.

On February 17, 2022, the Mansfield Foundation hosted Hiroyuki Suzuki (The Japan Bank for International Cooperation (JBIC)), Dr. Shino Watanabe (Sophia University in Tokyo, Japan), and Courtney Weatherby (The Stimson Center) for a discussion on how the United States and Japan are cooperating in the field of Free and Open Infrastructure.

View the roundtable on the Foundation’s YouTube page here.

Dr. Watanabe opened the discussion by focusing on China’s development financing and the challenges and opportunities China poses to U.S.-Japan involvement in developing overseas, particularly in the Indo-Pacific region. Chinese development is on an incredibly high scale compared to U.S. and Japanese involvement. Dr. Watanabe explained that our countries cannot ignore the amount of Chinese development finance today as it will continue to grow, but this growth will not necessarily come from Chinese traditional policy banks.

Mr. Suzuki followed onto the conversation by detailing the work JBIC is doing in the field of international development in order to sustain The Japan Bank for International Cooperation’s mission, which has four key areas of focus when it comes to financing: Contributing to Japan’s energy security, supporting Japanese business overseas, tackling climate change, and maintaining the international financial order. Overall, JBIC is working closely with allies like the United States, Australia, and now even India to help finance growing nations.

Finally, Ms. Weatherby discussed development more specifically in the realm of energy and mitigating climate change. The United States and Japan are working together in this field already, but she pressed that we should operationalize the Blue Dot Network, a mechanism that will certify infrastructure projects that meet robust standards for inclusivity, transparency, and sustainability, sooner rather than later.

The ensuing Q&A portion tackled questions focused on anti-corruption standards, how to handle China more specifically in terms of engagement, and how well the United States’ and Japanese development financing systems have been harmonized to facilitate cooperation, among many others. The session concluded with the three speakers offering their thoughts on The Quadrilateral Security Dialogue (QSD or colloquially the Quad) and the posture that the United States and Japan has towards the Asian Infrastructure Investment Bank (AIIB). Ultimately, the speakers concluded that the Quad has been successfully institutionalized to show the United States’ commitment in the Indo-Pacific region, but it is not a “security alliance.” When it comes to the AIIB, it might not be completely necessary for the United States and Japan to join, but there should be a space for China to do so. Excluding China could harm the potential for opportunities and collaboration with international development banks in the region.