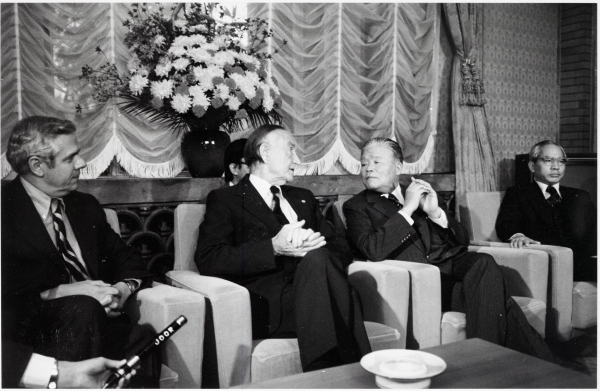 Thirty years ago Congress passed legislation authorizing funds for a foundation honoring Mike Mansfield, who played a pivotal role in many key domestic and international issues of the 20th century as U.S. congressman from Montana, Senate majority leader, and finally as U.S. ambassador to Japan from 1977 to early 1989.

The Mansfield Foundation has celebrated this anniversary by doing what we believe we do best –bringing U.S. and Asian leaders together to engage in substantive dialogue about important policy issues and to strengthen the networks that contribute to better understanding between our countries.

We have done this through events focusing on the past and future of the U.S.-Japan relationship, a relationship Mike Mansfield recognized as critical to the region and the world. Two years before the Mansfield Foundation was established, Mike Mansfield remarked that Japan’s “increasingly important role in the world” meant that U.S. ties with Japan, “…already the most important bilateral relationship we have, will take on even greater significance.” He predicted that the U.S.-Japan partnership would “deepen and produce major benefits, not only for Japan and the United States, but for the world.”

The Mansfield Foundation’s first 30th anniversary celebration, held in Washington, D.C. in May, provided an opportunity to look back at thirty years of U.S.-Japan relations and forward to a partnership that builds on this experience.  More than one hundred guests participated in a May 3 Capitol Hill Symposium, where comments from two panels of policy experts and policymakers pointed to the current strength of the U.S.-Japan relationship, the importance of continuing to build relationships and elevate dialogue between the two countries, and the opportunities for the United States and Japan to work together for economic and policy security.  For further information on the May 3 symposium, please click here. To view photos of the 30th Anniversary celebration in Washington, please click here.

The second celebration will be held November 6, at a Tokyo symposium examining the U.S.-Japan relationships and celebrating the Mansfield Fellowship Program. More information about this event is available here.

“The stability, reliability, and durability of our relationship provide the foundation of hope for the Pacific Basin’s future, as well as that of the rest of the world.”
Mike Mansfield, 1985

The above photo is from the Maureen and Mike Mansfield Digital Collection and is used courtesy of Archives and Special Collections, Mansfield Library, The University of Montana:  Ambassador Mansfield with Prime Minister Ohira; image 84.0368.