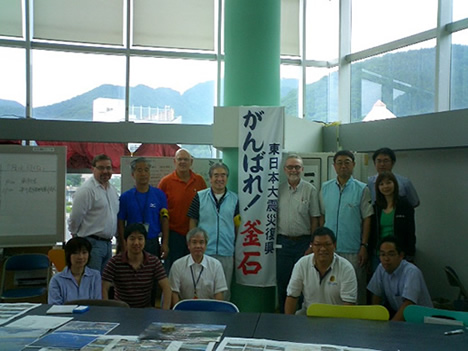 With diverse areas of expertise and first-hand experience in Japan, many Alumni Mansfield Fellows have a unique perspective on the implications of the Great East Japan Earthquake for Japan and for U.S.-Japan relations. A number of alumni Fellows have played a role in U.S. government efforts to support disaster relief efforts in Japan and to assess lessons the U.S. can learn from Japan’s experience.

Leo Bosner is an emergency management specialist who participated in the Mike Mansfield Fellowship Program as a representative of the Federal Emergency Management Agency, U.S. Department of Homeland Security, from 1999-2001.  During his Fellowship year in Japan, he served in full-time placements in Japan’s Defense Agency-Joint Staff Office (now the Ministry of Defense) and in the Tokyo Metropolitan Government’s Disaster Prevention Bureau.  Mr. Bosner was in Tokyo during the earthquake and returned in June at the invitation of Toyo University.  He was able to view some of the devastated areas and meet with disaster survivors as well as responders.  He shares his initial thoughts and questions in this commentary, “Japan’s Response to a Large-Scale Disaster:  Can It Be Improved?”

Zenji Nakazawa currently serves as deputy chief, Policy and Licensing Division, at the Federal Communications Commission’s (FCC) Public Safety and Homeland Security Bureau.  As a Mansfield Fellow (1997-1999) he served in full-time placements in Japan’s Ministry of Posts and Telecommunications (now the Ministry of Internal Affairs and Communication), and at Nippon Telegraph and Telephone Corporation’s Global Business Headquarters and NTT Mobile Communications Network, Inc. (NTT DoCoMo).  In this commentary, “Initial Observations of Japan’s Disaster Communications Response during the Great East Japan Earthquake,” Mr. Nakazawa shares his experience as part of an FCC working group tasked with reaching out to representatives of Japan’s government and telecommunications industry following the Great East Japan Earthquake.

Tony Waller, a tenant representative in the Office of Organization Resources – Contracting and Facilities Division, Public Buildings Service, U.S. General Services Administration, was a Mansfield Fellow from 2007-2009.  During his year in Japan he was assigned to the Ministry of Land, Infrastructure, Transport and Tourism, where he examined Japan’s approach to universal design and gained an in-depth understanding of the regulations, techniques, design concepts, and technical and product solutions being used to address the needs of Japan’s ageing society.  He shares insights based on his Fellowship experience in this commentary, “Reconstruction for Japan’s Tohoku Region.”

Michael Clark, a Fishery Management Specialist at the National Oceanic and Atmospheric Administration’s National Marine Fisheries Service, participated in the Mike Mansfield Fellowship Program from 2008-2010.  During his Fellowship year in Japan, he served in full-time placements in Japan’s Fisheries Agency, Fisheries Research Agency, Japanese Diet (legislative branch), a seafood trading company, and with a fisheries economist at Tokyo University.  Mr. Clark’s expertise and experience in Japan gave him a unique perspective on Japan’s fisheries industry and the impact of the Tohoku-Pacific earthquake on that industry.   He shares his thoughts on the challenges of rebuilding the fishing industry in Tohoku, a region critical to Japan’s domestic seafood production, in this commentary, “The Impacts of the 3-11 Tsunami on Regional Fisheries in Japan.”

Michael Clark, MFP No. 14, on fishing vessel based out of Otobe, Hokkaido.