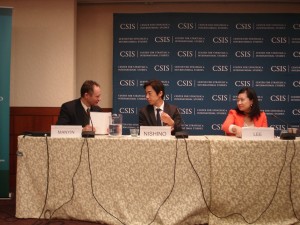 A panel of three policy experts weighed in on the question “Will U.S.-Japan-ROK Relations ‘Reset’ in 2013?” at a Korea-Japan Study Group meeting January 22.  The Korea-Japan Study Group meetings — an ongoing collaboration between the Mansfield Foundation, the Korea Economic Institute, and the Center for Strategic and International Studies’ (CSIS) Japan Chair — provide opportunities to examine issues impacting Korea and Japan.  At the January 22 meeting, Mark Manyin (Specialist in Asian Affairs, Congressional Research Service and U.S.-Japan Network for the Future Cohort I Scholar), Junya Nishino (Associate Professor, Keio University and Japan Scholar, Woodrow Wilson International Center for Scholars) and Ji-Young Lee (Assistant Professor, American University) focused on future Korea-Japan relations.  Professor Lee commented on Korea’s incoming administration, predicting that President-elect Park Geun-hye is likely to try to open talks with North Korea and to make a greater effort to improve relations with China.  She said the new administrations in Japan and Korea should avoid sliding into disputes regarding historical issues, but noted that trust is the key word for President-elect Park; with a foundation of trust between Korea and Japan, the relationship can remain strong even when difficulties arise.  Professor Nishino also noted that the path for Japan and Korea going forward will require both countries to be aware of the inflammatory nature of historical issues and to avoid politicizing them.  Moreover, Korea and Japan must have one vision for the future and work closely with Washington.  Dr. Manyin observed that, while cooperation between the U.S., Korea and Japan has continued, especially regarding North Korea, the level of trust between Korea and Japan has almost completely evaporated over the past two years.  He said the future of the Korea-Japan relationship depends on three factors:  developments related to North Korea, domestic politics, and leadership in both countries.  While predicting that the relationship would continue to be volatile and very vulnerable to domestic issues over the next few years, he said the two governments could come together over North Korea or in trilateral or multilateral settings.