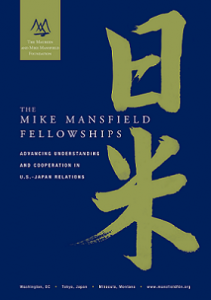 The Mike Mansfield Fellowship Program allows Fellows to develop an in-depth understanding of Japan and its government through a year of practical work inside Japanese government ministries and agencies, preceded by a year of intensive, full-time Japanese language and area studies training in the United States.  The Fellowships are administered by the Maureen and Mike Mansfield Foundation through an annual congressional appropriation, with the United States Department of State, Bureau of Educational and Cultural Affairs as grantor.

“We are delighted to mark a milestone for the Mike Mansfield Fellowships – with this latest group of Mansfield Fellows, one hundred federal government officials have now entered this unique exchange program,” said Gordon Flake, executive director of the Maureen and Mike Mansfield Foundation.  “This milestone comes at a time when U.S.-Japan cooperation is more important than ever.  In the months following the Great East Japan Earthquake, the Fellowship Program’s ongoing relevance has been underscored by the roles alumni Fellows have played in U.S. government efforts to contribute to disaster relief in Japan and to learn from Japan’s experience.   The seventeenth group of Mansfield Fellows is committed to helping the U.S. and Japan address common challenges – including regional security and long-term budgetary and economic challenges – as well as shared goals in the areas of aviation safety and international fisheries management.   Their Fellowships will enable them to build on their expertise in these areas, expand their understanding of Japan and its government, and help contribute to a stronger U.S.-Japan alliance in the years ahead.”