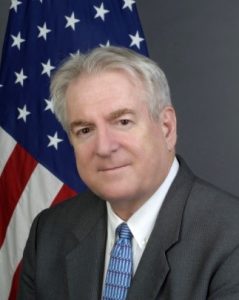 Ambassador Robert M. Orr was a Distinguished Fellow at the Mansfield Foundation from 2019 until his death in August 2021.

Ambassador Orr was also a Distinguished Visiting Professor in the Department of History at Florida Atlantic University and member of the board of directors at the Council of American Ambassadors.

He was confirmed by the Senate as United States Ambassador to the Asian Development Bank (ADB) in September 2010. In July 2013 he became Dean of the Board of the ADB, the first American so elected in history. He served as U.S. Ambassador to the ADB until 2016. From 2007-2010 he was Chairman of the Board of the Panasonic Foundation and concurrently Vice Chair of the National Association of Japan-America Societies.

The Government of Japan conferred the Order of the Rising Sun, Gold Rays with Rosette on Ambassador Orr in the Spring of 2019.

From January 2002 until March 2007, Ambassador Orr was President of Boeing Japan, holding that position during the development of the most successfully selling airplane in history, the 787 Dreamliner, 35% of which is made in Japan. Prior to joining Boeing, he was Vice President and Director of European Affairs for Motorola based in Brussels. Before that he held various senior level posts with Motorola in Japan culminating as Vice President of Government Relations. In that capacity he successfully led the negotiations that opened up the cellular phone market in Japan.

In addition to the corporate world and government, he has also spent many years in academia. Between 1985 and 1993 he was a professor of Political Science at Temple University in Japan with two years off to run the Kyoto Center for Japanese Studies and the Stanford Center for Technology and Innovation at the Stanford Japan Center in Kyoto. His book The Emergence of Japan’s Foreign Aid Power, published by Columbia University Press, won the 1991 Ohira Prize for best book on the Asia Pacific.

His career began in 1976 when he worked for two years as Legislative Assistant to Congressman Paul G. Rogers (D-FL), a twelve-term member of the U.S. House of Representatives. Between 1978 and 1981 he served on the House Foreign Affairs Asia Subcommittee staff, seconded from the Select Committee on Narcotics. Between 1981 and 1983 he served as Special Assistant to the Assistant Administrator of Asia in the U.S. Agency for International Development.