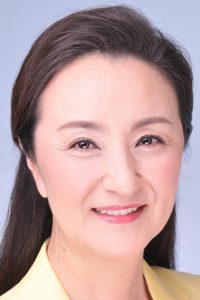 Mieko Nakabayashi, who served as a Member of Japan’s House of Representatives from 2009 to 2012 (representing the 1st District, Yokohama, Kanagawa Prefecture), is currently a Professor at the School of Social Sciences, Waseda University, Tokyo.

Prior to becoming a member of the Japanese parliament, Dr. Nakabayashi taught as a tenured Associate Professor on the Faculty of Management, Atomi Women’s University. She also served in the Japanese government, as a Commissioner of the Council on the Fiscal System at the Ministry of Finance; a member of the International Committee of the Council on Science and Technology at the Ministry of Education, Culture, Sports, Science and Technology; a member of the Radioactive Nuclear Waste Subcommittee at the Agency for National Resources and Energy in the Ministry of Economy, Trade and Industry; and a visiting scholar at the Legislative Council and the Research Bureau of the House of Representatives. From 2002 to 2005, Dr. Nakabayashi worked as a resident fellow at the Research Institute of Economy, Trade and Industry (RIETI), where she produced and published numerous scholarly articles.

Dr. Nakabayashi is the author of President Trump and Congress (2017) and the best-selling book, Simple Habits of Globally Competitive Professional Women (2012). She has also authored or co-authored A Challenge to Obama & America (2009), Citizen Literacy (2005), New Schedule for Administrative and Fiscal Reform (2005), and Fiscal Reform of Japan (2004). In Washington, DC, Nakabayashi served on the Republican professional staff of the Senate Committee on the Budget under Chairman Pete Domenici from 1993 to 2002. Dr. Nakabayashi received her PhD (Doctor of International Public Policy) from Osaka University and an MA in Political Science from Washington State University.