About Maureen and Mike Mansfield

The Foundation honors the work and legacy of Mike and Maureen Hayes Mansfield. Mike Mansfield (1903-2001) was a remarkable public servant and distinguished statesman who helped guide the United States through important transitions in the domestic arena and in its relationship with Asia. Mike Mansfield left enduring marks on his home state of Montana, the U.S. Senate, and international diplomacy. He and Maureen were married for 68 years and their partnership was marked by extraordinary devotion, commitment and respect.

Currently available at your local bookstore… 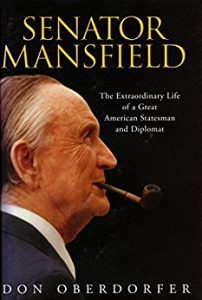 Senator Mike Mansfield often said he did not want his biography written and he refused proposals from more than a dozen publishing houses following his retirement as U.S. ambassador to Japan. However, over a three year period before his death in 2001, Mike Mansfield agreed to sit for a series of 32 interviews with journalist Don Oberdorfer. Oberdorfer’s Mansfield biography, the result of these interviews, extensive research, and Oberdorfer’s interviews with elected officials, diplomats, Capitol Hill staff and others who knew and worked with Mike Mansfield, was published in October 2003.